“I don’t have to believe in Feng Shui; using it helps me to make money”
– these are words of Donald Trump, whose fortune amounts to an estimated $4.5 billion.

“As a businessman, I am not that stupid to ignore this 5000-years old art,” he is reported to have said in an interview.

By the way, during his speech in Moscow, Jack Canfield, a millionaire and one of the creators of “The Secret” film, said that he consults his Feng Shui master every year :).

So, skeptics should consider whether or not their opinions might be costing them money.

Flowing water embodies a constant movement forward and hinders stagnation in business. A “mouth of water” is a place of inflow of one water reservoir into another.

Choose a dwelling in proximity to at least one mouth of water. Such formations are very auspicious. The water reservoir can be both natural and artificial: a spring, a lake, a pond, an ocean. It is important that mouths of water flow only in one direction.

A famous example of this principle is Bill Gates’ house in Medina, at the bank of Lake Washington. This district has at least two big mouths of water. The one which is closer to the house is shown on the map. In this particular case, they are situated in the North and North-West.

Inside the mansions, the role of “mouth of water” is played by an artificial spring in the yard of the house, which inflows into Lake Washington.

One of the essential conditions for accumulation of wealth is creating conditions where Qi energy not only flows into your area without any barriers but also stays there for a long time. When choosing a location, make sure there is a lock which locks positive Qi in your district.

The role of a Qi lock can be played by a trestle or a bridge over a river, a hill, a mountain, or a tall building. Below there is a photo of a bridge over one of the rivers near Bill Gate’s home. This neighborhood is literally full of Qi locks.

Regarding Feng Shui, a road is a virtual river. It is important not to have a road end in front of your house; it may lead to the appearance of insurmountable barriers. Avoid busy crossroads, especially T-shaped intersections. Such places are considered inauspicious.

The more plants, the better. It doesn’t matter if it is a lawn or a forest with old trees. If an entrance door faces a park or at least a small flower bed, it is very good.
But! Do not use climbing (vining) plants on the façade, following the example of Nicolas Cage in his mansion in Bel-Air. In this case, Qi flows away from the house, and over time its owners will face financial difficulties. 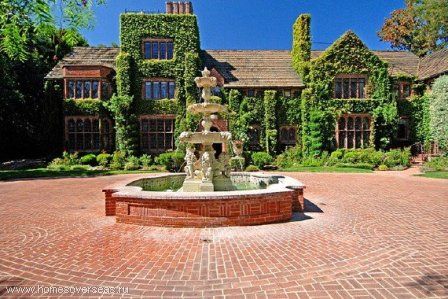 Tip 5. Be intentional about the shape of the house.

It is better to choose or build a rectangular building. It is not a panacea, however. Have a look at the map of Bill Gates mansion below. The house has a very complicated irregular form. By the way, a garage with four doors doesn’t meet Feng Shui requirements. In China number 4 is associated with death, and opening garage doors create quite a dangerous structure, a Tiger with its mouth wide open.

Remember:
1) Qi and Sha energies are inseparably connected, and a perfect house with perfect Feng Shui will also have a lot of flaws.
2) The inauspicious effect of Sha can be neutralized (Bill Gates did, that having “sunk” the doors in the wall of the garage, that’s why negative energy does not attack them, passing them tangentially.)
3) The auspicious energy of the land where the house is built is much stronger than the energy of the buildings.
4) If there are dangerous areas in your district, their effect can be reduced or eliminated with the help of knowledge in Chinese metaphysics.

What will you get as a result?
Using these five tips, you certainly won’t become Bill Gates. However, it can increase your well-being by 30%, improve your relationships and health… Isn’t that sufficient?

Study examples of those who have already received good results with Feng Shui techniques and use their examples in your life!

Let the good Feng Shui be with you!
Vladimir Zakharov